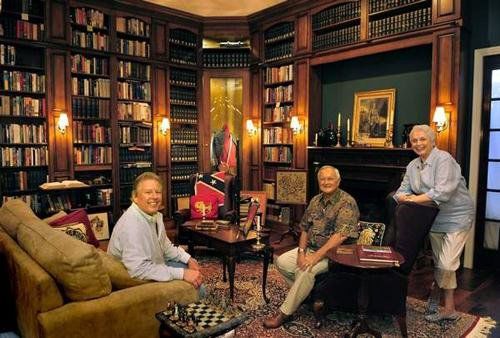 When Dr. Bruce R. Maxian was a child growing up in New York, his mother frequently took him with her as she shopped for antiques. While she hunted for china and crystal, young  Bruce looked around for something to do. At age 7, he spotted a volume of "The  Photographic History of the Civil War," by Francis Trevelyan Miller, on a table in a shop. He picked up it and couldn't put it down.

His mother bought him the book, and that was the beginning of a massive collection of Civil  War memorabilia and his life as a curator and scholar. Recently, he and his wife, Connie,  realized a long-standing dream -- a proper home library to organize and creatively display  the professor's Civil War collection, which includes more than 8,000 books, as well as prints  and documents, stamps and currency, uniforms, miniatures, textiles, prison art, arms and  more.

The 38- by 26-foot, wood-paneled home library is at the end of a long, wide hallway from the kitchen/dining area, and is accessed by a set of double doors, wood at the bottom and glass on top. On one door are symbols of the Confederacy; on the other are Union icons.

The library is formal but mellow, with the appeal of an English country house. The American and British antiques are comfortably worn with a soft patina of use. The room exhibits no sense of newness except in the technological sophistication of the lighting, climate control  (humidity is a constant 40 percent) and state-of-the-art security system.

"One authority did tell me to put black lampshades on the brass chandelier candle lights,"  said Maxian. Light is an enemy of manuscripts.

But while it appears vintage, the library is new and is part of an ambitious renovation and addition to the Maxians' house that took the dwelling from 2,400 square feet to just over  4,000. John King of Rampart Homes did the renovation/addition, which, besides the library,  included a kitchen reconfiguration and new pantry, a new swimming pool and pool bath, a  relocation and enlargement of the laundry room, and the addition of a den/guest room,  family room and office for Maxian on the other side of the library. The Maxians' budget was  from $490,000 to $525,000. They came in under their maximum.

Brian Phipps collaborated with the homeowners and King on the library. Sarasota Cabinetry,  under the direction of brothers Don and Gary Miller, constructed and installed the built-in maple library shelving system, including secret doors. Two traditional rolling library ladders are particularly popular with the grandchildren.

Connie Maxian and Bruce's mother needle pointed the pillows in the library. The fireplace lends a gracious ambiance, but the "flames" are actually LED lights.

"We wanted atmosphere, but a real roaring fire and smoke wouldn't be good for the books,"  said Bruce Maxian, who is a retired professor of Library and Information Science who taught at Long Island University. The ceiling in the library is 12 feet high; the floors are engineered wood in a mahogany stain. The raised-panel door cabinetry was given a nine-step finish for durability and to complement the flooring.

King said the ultimate success of the library was the result of assembling the right people for the job and putting quality time on the front end of the project.

"We spent two years designing the space and refining it so that when we started the actual physical work, we were absolutely sure of what we were going to get," said King.

"The library was one of the more challenging projects of my career because of the scope of the project and because of all the special things that had to go into this space beside books," said King. "This library preserves and displays artifacts, but also functions as a  beautiful and practical room where the homeowner can do research, read for pleasure,  write. It had to be perfectly organized and meticulously installed. We didn't want any bad  surprises halfway through the process."  Besides storage in the library itself, King installed a climate-controlled attic for additional storage and for a back-up generator.

King has owned Rampart Homes since 1990. He is a Certified Graduate Remodeler, one of only about 400 in the nation. He was born and raised in Sarasota and is a graduate of the  University of South Florida. He is the son of Rolland King, the developer of Gulf Gate, South  Gate, Centergate and many other local neighborhoods and communities. Bruce Maxian is still collecting, and although he has never sold or traded any part of his collection, he is about to edit it.

"During my many years of buying, I've amassed duplicates of books, manuscripts, etc.," he said. "I'll have the entire collection appraised, and someday I'll donate it to a university. My  intention is for the collection to remain intact."

Copyright © 2010 HeraldTribune.com — All rights reserved. Restricted use only.