For some, downswing has an upside 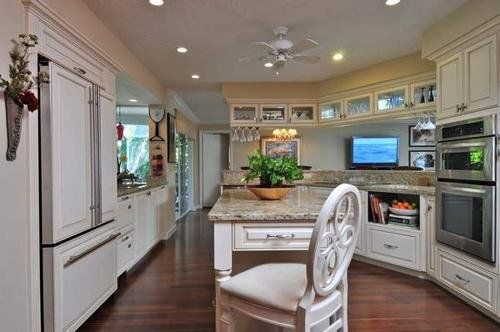 In her 25 years of marketing for home builders, Tracy Lux has learned -- and taught -- a lot about how houses are designed and built.
But her own aging house, built in 1966, was becoming decreasingly suitable for her needs.
Lux, who runs Trace Marketing Services out of her Forest Lakes home in Sarasota, admits to being "a junior senior" and less able and willing to negotiate a functionally obsolete kitchen and floor plan than she once was.

So, working with contractor John King of Rampart Homes and interior designers Laurel Phipps and Heather Kardos of Laurel Design Group, she remodeled the 1,800-squarefoot house using the concepts of universal design.

"I am walking the talk," said Lux, who teaches builders how to market universal design in their houses and condominiums.
Universal design is "the design of products and environments to be usable by all people, to the greatest extent possible, without the need for adaptation or specialized design," writes Ron Mace, founder of the Center for Universal Design at North Carolina State University, on its Web site, www.design.ncsu.edu/cud .

Also known as "design for all," "inclusive design" or "aging in place," universal design is a menu of design and materials choices that are inclusive, preventive, ergonomic and efficient, attractive and transgenerational.

The kitchen is the key Putting universal design principles into practice at the Lux home started with overhauling the kitchen. Lux likes to entertain, and the kitchen was entirely unsuitable for that. In fact, when the refrigerator door was opened, foot traffic came to a standstill.

"The original counter came out to here," said Lux, pointing, "and when you opened the refrigerator, you literally could not get into and out of the kitchen. It was a bottleneck, and I love to entertain. It didn't make any sense. So that was a motivator"
in her decision to remodel.

The interior design team worked with King to create a slightly larger but much more open kitchen, with no barriers to the family room. On the other side, a breakfast bar is all that separates the kitchen from the living/dining area. There's not even a range
hood above the cooktop: with the push of a button, a downdraft ventilation system rises behind the cooktop to carry steam, smoke, and odors to the outside. The main benefit is that from the kitchen and even seated at the center island with her
newspaper and morning coffee, Lux has an unobstructed view of the flat-screen TV on the living-room wall.

The kitchen has easy-maintenance granite counters, a French-door Jenn-Air refrigerator with bottom freezer, a two-drawer dishwasher from Fisher & Paykel that's ideal for small households, and a microwave oven slightly above elbow level for the 5-
foot-tall Lux.

The center island, also topped with granite, has extra-deep drawers and pull-out storage for dishes. It is directly opposite the dishwasher for ease of transfer.

The cabinets, built by Don Miller at Sarasota Cabinetry, are a key to the kitchen's design. Phipps painstakingly laid it out in a logical fashion to facilitate ease of use.

Throughout much of the house, floors are hard-surface to reduce the risk of tripping and facilitate the possible use of a walker or wheelchair. The floor plan does the same; the widths of pathways are precisely measured to facilitate movement.

In one of the house's three bathrooms, the doorway was widened and the shower stall outfitted with a grab bar, hand-held shower head and seat and changed out the vanity.

"I thought if I really was going to live and work here for the next 10 years," said Lux, "then there are a lot of motivators: my physical condition, I have pretty severe arthritis in the knees; my height, 5 feet tall; and the fact that I am getting to those
mature years. We won't say old -- I am 'age-qualified.'

"One of the lines I use when I am teaching remodelers is to talk to older people with aging housing and say, 'The dream home you've always envisioned may be the home you already own.' That is my catchphrase for remodelers."

The universal design movement grew in response to changing demographics and attitudes. The U.S. population has grown older. At the same time, more people have physical disabilities, and society has become more accepting of them. In turn, laws have been written to protect the interests of the disabled.

But universal design is not just for the disabled; it is related to, but not a substitute for, handicap accessibility.

"It is making a home usable to as many people as possible," said John King, the contractor. "This is not 100 percent universal design, nor did we intend it to be that.

Tracy was looking to make this a home that she could stay in for some time. "Part of the overall planning process was starting with the wish list of things we wanted to do," said King. "We went through numerous, numerous floor plans and ideas and thinking processes of how to best utilize the space here.

"From that, once we finally decided on the floor plan, we simply got into pricing it out and creating a schedule and sticking with it and going forward."

Lux exceeded her budget and spent about $125,000 on the four-month project. But King, whose portion came to $108,000 with change orders, said homeowners can retrofit universal design into their homes for as little as a few hundred or a few thousand dollars by replacing doorknobs with lever door handles, changing or lowering wall switches, improving lighting, replacing carpet with hard-surface flooring, widening doorways, and installing blocking in the shower stall for the eventual use of grab bars.

"The key component for us when we do any remodeling is that it appears as it should appear -- that is, as if it has always been that way," said King, who discusses universal design with every client. "We strive very hard to have everything blend in correctly and function well." In the Lux home, that meant real plaster was used instead of drywall because the original walls and ceilings are plaster.

Lux says universal design is a concept she can sell to builders. "When we are teaching, we never use the words handicap accessible. That turns builders off. They don't think they can market it. So we coined 'Designs for Easy Living.' That is more palatable to the market," said Lux, whose company documented her remodeling project in a video that will be presented at the 2010 International Builders Show in Las Vegas.

"My passion is to get people to consider this as an option, especially in these tough economic times," she said. "Instead of people stopping their plans for how they are going to live, think about staying where they are and doing this. This is such a great opportunity for our town that has all this aging stock that is so well located."

For information on Trace Marketing's remodel video, go to http://www.tracemarketing.com and click on In the News.

Copyright © 2008 HeraldTribune.com — All rights reserved. Restricted use only.